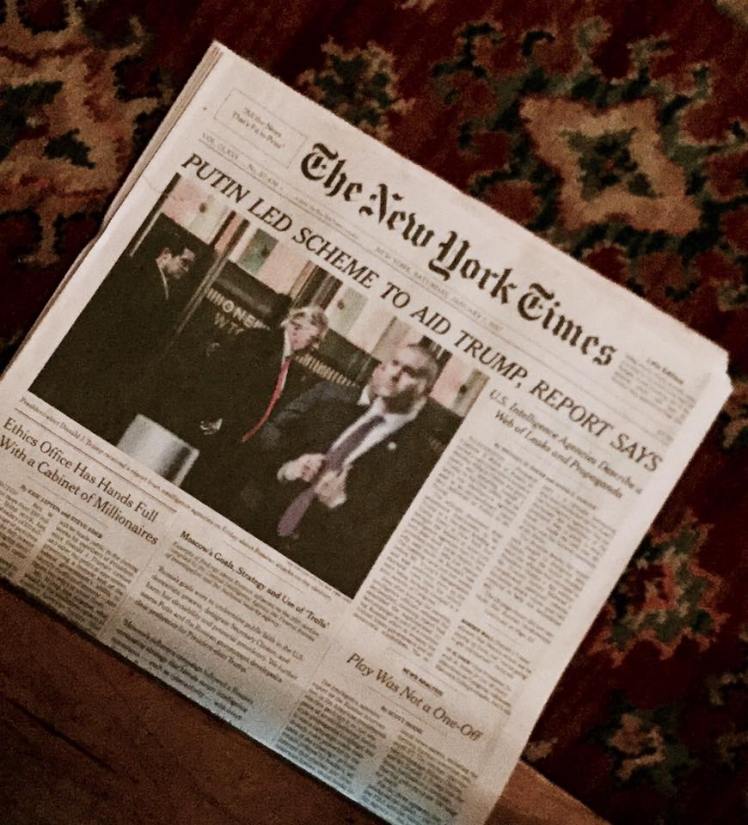 I’d already seen the FT’s version of this headline on my phone before opening my hotel door early this afternoon. In fact, I’d managed to incorporate the 25-page ‘intelligence report’ into my hangover-recovery ritual.

Having been dragged wide-eyed and open-mouthed through the unrestrained politicisation of intelligence dossiers in the lead up to the Second Gulf War, this contrived establishment soliloquy was only too familiar.

The Olympian effort to bind together the Clinton campaign’s favourite bogeymen—Trump and Putin—is clearly not going to end gracefully. In the meantime, I think the US establishment is making a grave error in its decision to continue trying to manage public opinion by attempting to inflict a Carthaginian peace upon its populist upstart adversaries.

The hacked emails were received and published by Wikileaks. If there’s an agenda behind their publication, isn’t it reasonable to consider whether it might have been Wikileaks’ agenda? Apparently not, given that there’s no mention of Wikileaks’ own agenda throughout the report. That doesn’t warrant a thought, it seems: all we need to know is that its publication served Putin’s agenda.

It’s also unworthy of any mention that the information was true, and gave the public a unique insight into what the senior Clinton campaign managers say to each other behind the public’s back. Information that democracy purists might even suggest would enhance the democratic process. Certainly, the Clinton campaign worked indefatigably to reveal behind-the-scenes insight into their opponent’s world. But that’s just not relevant, apparently: Revealing to the public accurate information about what the Clinton campaign says to itself served only—according to the intelligence report—to ‘denigrate Secretary Clinton, and hurt her electability’.

I mean… seriously? If the goal here is to diminish Trump’s chances of a second term, these dealers need to relearn their poker.